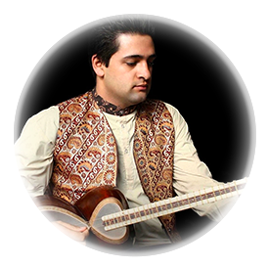 Mohssen Hosseini was born in 1982 in the north of Iran, Golestan Province. He was learning “Tar” and “Setar” (Persian Instruments) for about 14 years from Fariborz Aziz and Keyvan Saket (Great Persian Maestro).
He performed many concerts in Iran (e.g. Vahdat Hall in Tehran). Participated in National Orchestra of Persian Music in Gorgan (conductor Keyvan Saket). Performed in many festivals, twice was chosen the best soloist in Festival of Soloist of Golestan Province (Jashnvare Taknavazi Golestan) and with his ensemble took the first place in Music Festival in Gorgan.

Since October 2008 he was living in Poland for studying and also he is a member of Neyriz ensemble and gave many concerts in Poland and Europe.
At present he is a PhD student in the area of Automation and Robotics at University of Bologna, Italy and also teaching Iranian string instruments, Tar and Setar.