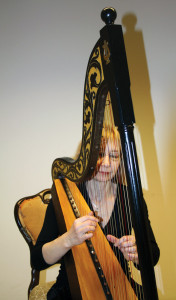 A versatile musician Lilian Langsepp plays harpsichord, organ, historical harps, guzheng and
is singing and teaching Gregorian Chant. Since 1994 she has been active in recording and
performing with various early music groups and as a soloist and has performed at numerous
festivals and concerts in Europe, Asia, Argentina and the USA.

L.L. has devoted herself primarily to the repertoire of European baroque and medieval music
but her performances include also music from Asian traditional cultures, mainly Chinese and
Persian classical music. She has learned Hindustani classical and Chinese music from such
eminent musicians as Ustad Ali Akbar Khan and Fan Ran. Her postgraduate studies at the
Schola Cantorum Basiliensis, Switzerland (1997–2000) focussed on historical harps and early
music performance practice. Over the years she has developed her personal harp playing style
for gothic harp which has been influenced by different styles in Asian classical music. Her
aim has been to research and revive the harp-like instruments and playing techniques in Asian
musical cultures as well as to use these techniques in European medieval music interpretation
and improvisation.

Ms. Langsepp is lecturer of music at the University of Tartu and teacher at the H. Eller Music
School. She has worked for Tartu Early Music Festival as consultant and editor since its start
in 1996.

In recent years L.L. has put a lot of effort to work on concert programs for the historic XIX
century harp which has been restored at her initiative by Roland Suits. The instrument is
tuned diatonically which sets certain limits to the repertoire. Being found from the Estonian
island Saaremaa, the harp has acquired nickname “Saaremaa harp” or “Saareharp”.
Dances in the Wind is a solo program which offers a selection of pieces by 17th–18th century
German and English composers, Lilian Langsepp’s own compositions as well as
improvisation on various themes ranging from medieval to Irish music.