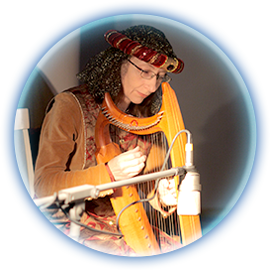 Versatile musician Lilian Langsepp began her music studies with Western classical music (piano, music theory and choir conducting), and she has a Bachelor’s degree in Musicology from the Estonian State Conservatory. In 1994 she began regularly working with Raho Langsepp in such early music groups as Via Sonora and FA Schola Ensemble. From 1997 to 2000 she did postgraduate studies in Switzerland at the Schola Cantorum Basiliensis, specializing mainly in Spanish baroque harp, Spanish organ repertoire, and improvisation in different styles.

In addition, since 1996 her interest in non-Western music has led her not only to play various types of Asian music on the medieval harp, but also to take master classes in North Indian and Chinese music.

In 2005 she earned her Master’s Degree in Musicology from the Estonian Academy of Music; her thesis was “Mode and Tonal Structure in Diego Fernandez de Huete’s Passacaglia Variations”. In addition to her performances as a pre-classical harp soloist, she has appeared widely as a performer of harpsichord, organ and guzheng as well as director of a Gregorian chant group. She has made numerous recordings and has participated in recordings by various ensembles.

She currently teaches in Tartu at both the University of Tartu and the Heino Eller School of Music.